You Can Call Me Miss Mommy

Sweet Girl has this amazing ability to remember anything set to music.  Anything.  Just recently her ABA therapist put my phone number to a little tune and now Sweet Girl can tell you her phone number (80% of the time).  She used to love Jack's Big Music Show on Nick Jr.  The puppets (the reason we don't watch any more; she's developed a full-on phobia of anything muppet related.  No Sesame Street, no actual Muppets - which kills me - no more Jack's Big Music Show, not even those stupid Le Bron James commercials with the muppets and the shoes) played instruments and they had two breaks per episode where they showed videos of musical acts.  This is where I learned about Laurie Berkner.  She does kid music in the way that Sandra Boynton does children's books.  That is to say, in a manner that will not leave the parents hoping they lose their sense of hearing so they no longer have to endure the music.  Anyway, we used the "Clean It Up" song with Sweet Girl for a long time.  And there are days when I want the world to sit down and listen to "I'm Not Perfect."  Then maybe I could teach them all to sing that in harmony.  Or maybe Coke would get all territorial and tell me I can't do that without buying everyone a Coke product.  Which would be a problem because I don't have that kind of money and more importantly I'm part of a new generation.

Regardless of product placement, Sweet Girl loves music.  Not only can she memorize lyrics easily but she provides accompaniment as well.  Which means that I'm only half-joking when I say she'll  be winning beat-boxing competitions.  One our other favorite groups is Choo Choo Soul, and if I ask Sweet Girl to sing their counting song (aptly named "1-2-3"), she starts not at the lyrics but at the beginning with the beat-boxing.  And she's pretty good......spit-a-riffic, but pretty good.  She practically leads circle time at school because her teacher gave us a copy of The Alphabet March CD they use to teach letters.  We've listened to it a million times, but Sweet Girl had it all memorized by listen number three.  She was correcting me on listen number four.  In the past month, she's been singing contemporary songs while she's in the bathtub.  Songs I didn't even know she paid attention to in the short car rides to and from school.  But in the middle of rinsing the shampoo out of her hair she seamlessly mashed up "Moves Like Jagger" and "Pumped Up Kicks."  And while I'm proud of her musical abilities, it's still disconcerting to hear your four year old sing "put your lips on me, for the night."  I've mentioned that she loves Disney Junior shows, but her favorite part of any of them is the music.  Thanks to Little Einsteins she can match some classical melodies with the composer.  She has trouble communicating with words, but she has no trouble absorbing anything musical that comes in her path.

And then Aunt Carrie gave her a movie for her birthday.  Not a cartoon or one of her tv show compilations, but a real movie with live actors and everything.  Aunt Carrie gave her "Annie" for her birthday.  And now I've had to tell Sweet Girl she may not do somersaults off her bed.  I've also had to tell her that our dog is not a professional actor and therefore is not going to hit the cue you give him to "Come here, Sandy!  Good ole, Sandy!", especially when his name is Oreo and he prefers the limelight to the spotlight.  Not to mention he'd rather you not shout "Dumb Dog!" at him after you manage to coax him off the couch.  At first Sweet Girl watched parts of the movie.  The second time she watched, she watched more than she did before while humming along.  And now she watches the whole thing as she sings and dances along.  She uses the stairs to the bonus room to reproduce "Hard Knock Life" with great accuracy.  She does excellent hiccups at the end of Ms. Hannigan's drunken lament of "Little Girls."  Last Friday as I was signing her into school, she circled around me and her teacher singing "We got Annie!" with her hips swaying and her fingers pointing up in the air a la Ann Reinking.  She has been singing the songs often enough around the house that Little Man now busts out "Mah morrow! Mah morrow! Love you! Mah morrow!" at the most inopportune of times.  Though I'm not really sure when an opportune time for off-key musical reproductions would be.

The problem with the music, and particularly "Annie" is that it becomes constant.  In the grocery store, at school, on the swings, at speech therapy, going to bed, wherever, whenever, there is constant music from Sweet Girl.  When she isn't feeling well it ramps up to the point of compulsion.  When she's nervous or anxious, it becomes her way of coping.  When she's bored, music is her way of filing the time.  I'm not even sure she knows she's doing it most of the time.  Because I'm her mother and well, live within earshot and my auditory sense is intact, it can get tiresome.  Quickly.  So I'm often battling something that she loves, trying to find balance for her.  Trying to find a way to balance the boredom, the anxiety, or the obsession so she has more than one way to cope.  Also, trying to find some balance between constant noise and quiet for me.  I don't do well with constant noise.  It makes me mean.  It makes me want to find the composers of the Broadway show and ask them just why they thought it was necessary to make the tunes so infectious?  Why would they do that to me?  What did I ever do to them?  So the coup de grace came this past weekend.  After a particularly long day of battling constant noise, I was putting Sweet Girl to bed.  After our routine of books and then putting all ninety-five of her blankets in order, I leaned down to kiss her good night.  She looked up at me and in her best monotone, orphanage resident voice said the exact words that every orphan is taught to say, but with a special twist: "I love you, Miss Mommy."  So there you have it.  I'm now the drunken headmistress making bathtub gin and serving cold mush.  And I'm alright with that.  I've always liked Carol Burnett.  Of course, I don't really like gin - bathtub or otherwise - but I bet I can find a substitute.  I'm not worried.  After all, the sun'll come out tomorrow and Sweet Girl'll love me then.  It is a hard knock life after all.
Email Post 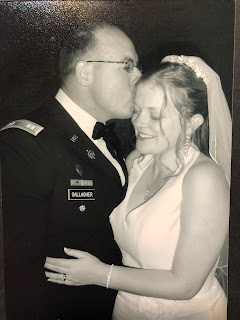